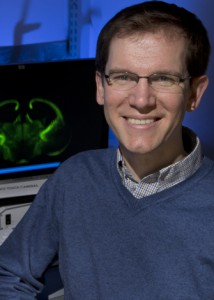 The Veenstra-VanderWeele lab is dedicated to helping children with autism spectrum disorder (ASD) or obsessive compulsive disorder (OCD) and their families. We are approaching this goal using a variety of techniques, from animal models to research in adults with ASD. The majority of our efforts go toward developing and studying mouse models to understand the relationship between ASD or OCD risk factors and the resulting changes in brain and behavior. We are also working to translate laboratory research findings into novel treatments for children and adults with autism spectrum disorders or related syndromal disorders.”

Dr. Veenstra-VanderWeele’s research program moved to Columbia in January, 2015, with the opening of his molecular laboratory. His team has begun using transcriptional profiling and pharmacology to generate hypotheses and test novel agents to rescue social and repetitive behavior in genetic mouse models of autism spectrum disorder (ASD). Additionally, a new clinical and translational research space at the Center for Autism and the Developing Brain opened in April, 2015. The first study launched in this space is testing intranasal oxytocin as a potential treatment for social impairment in ASD, with genetic, epigenetic, and biochemical markers assessed as modifiers of treatment response. Using the capabilities of this space, he is also launching a biorepository for genetic and other biomarkers within the ASD population, with the goal to identify subgroups of patients who may benefit from a precision medicine approach to treatment of their ASD.